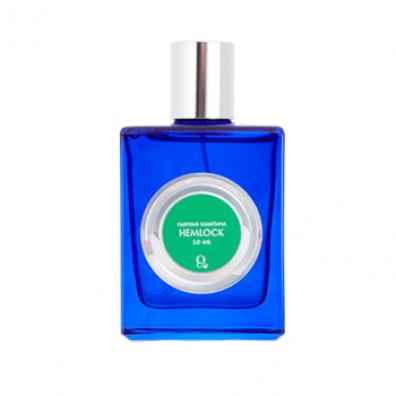 Get Started
DISCOVER THE FRAGRANCE YOU'VE BEEN SEARCHING FOR. FIND YOUR PERFECT SCENT NOW!
APPROXIMATELY ONE MONTH SUPPLY OF FRAGRANCE FOR $15.95
Redeem your gift

Hemlock by Parfums Quartana, Designer is an Eau de Toilette at 12 percent.

Commentary from Joseph Quartana: "In Ancient Greece, hemlock was used to execute condemned prisoners, the most famous being the philosopher Socrates. The word itself derives from the Greek word ”konas” meaning to whirl about, as its effect is vertigo and death. Hemlock itself is a delicate, small white flower that grows in green grassy fields, and with this idea as the backdrop for the fragrance, but added black vinyl accord to suggest a wicked black liquid."

"Socrates gave a lot of advice, and he was given hemlock to drink"
— Rose Kennedy

Created by Joseph Quartana, founder of both Six Scents Parfums and the former cutting-edge fashion boutique Seven New York, PARFUMS QUARTANA is a premium fragrance line within the Six Scents umbrella exploring singular themes through a series of prestigious limited-edition scents. The brand is the culmination of Joseph Quartana’s unique vision, produced in small batches using the finest ingredients and precious oils.

About the Perfumer: Christelle Laprade

Christelle was born in the south of France, where the warm and vibrant scents of the “garrigue” meet the deep blue of the Mediterranean sea.  A childhood spent in the landscapes painted by Paul Cezanne imprinted her memory with the bold colors of it’s rough nature, and instilled in her a passion for pleasant odors.  She is currently working in the Symrise New York Studio ; the city’s eclectic styles and exuberant energy fuel her creativity now.  Though being away from her country makes her appreciate what she left behind and her creations combine both cultures.  For Christelle, a perfume is a second skin: It’s intimate, it touches the soul.  What fascinates her about her work is to be able to inspire emotions, imprint memories, and create ethereal beauty...

For $15.95 a month, receive .30oz/9ml, approx. 150 sprays. One month supply of fragrance. Free shipping. (Other monthly plan options available at checkout)
PREMIUM FRAGRANCE
Your membership will be charged an additional $5.00 for this Premium Fragrance
Disclaimer:
LUXSB is a solely independent company from the designers or the designer's manufacturers. LUXSB independently re-bottles original fragrances.

This was my first try from Parfums Quartana and is, hands down, still my favorite. PQ is making the game harder for all the other houses. When the description tells you “vinyl accord” get ready — you’ll soon be spinning old records in your mind. The dry down is lust worthy, a lot masculine, a bit feminine. If you’ve flirted with crossing over to the men’s side of the fragrance aisle, give this a shot. If you want something intensely complex, bold, big sillage, big longevity... this one. May not be work appropriate unless applied lightly. Got the big bottle for Christmas. Poppy Soma is next.

Fantastic fragrance.  Perfect combination of sweet and spicy.  Definitely a unisex fragrance which I tend to really love.  This is definitely one of my favorites.  When I read the description and saw "black vinyl", I was wondering about how that would affect the scent, but I can tell you, it's a definite plus.  Once you smell this, you'll know what I mean.  You get that hint of vinyl, and it's amazing with the combination of sweet/spicy.

Confoundingly beautiful! Everything PQ is ingeniously blended with the highest quality ingredients. Love it so much I just bought full size bottle.

Become a member to leave your review!